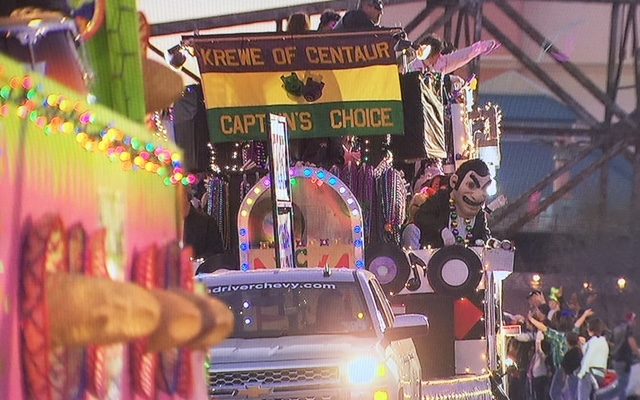 Mardi Gras in the ArkLaTex continues to get bigger and better each year and we are rolling in to best time of the season. The Krewe of Centaur Parade rolls Saturday, February 23 in Shreveport starting at 4:30pm.

The Krewe of Barkus & Meow Mardi Paw Parade is always loads of fun for people and animals and is set for Sunday, February 24.  Activities get started at noon and the parade rolls around 3:00.

Mardi Gras Upriver in Jefferson with the Krewe of Hebe gets started on March 1 and goes through March 3. There’s live bands and several parades to watch or participate in! The Krewe of Hebe Grand Parade is Saturday, March 2 starting at 2:00.

The Krewe of Gemini Parade, the first parading Krewe in Shreveport, gets rolling on Saturday, March 2 starting at 4:00.

The Krewe of Highland parade is one of the most unique parades in the area and has grown bigger each year. It winds its way through the historic Highland neighborhood in Shreveport on Sunday, March 3 starting at 2:00.

The Fat Tuesday Children’s Parade Hosted by the Krewe de Les Femmes and Kingstowne Family Life Center will be held at Pierre Bossier Mall on Tuesday, March 5 at 6:30 p.m.

Come in costume or Mardi Gras attire to celebrate the beginning of the city in the old Shreve Town area. The Fat Tuesday in Shreve Town, A Walking parade gets started at 7:00 on Tuesday, March 5.

Go to the Gig Guide for more information on the parades and laissez les bon temps rouler!