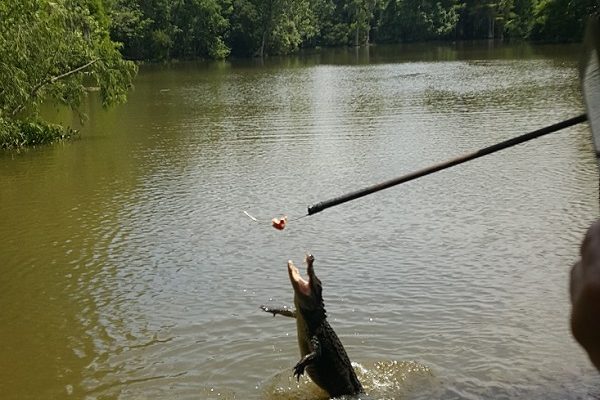 Late ZepTember will find the Tom’sMaHaul crew in deep South Louisiana, visiting my mother, but likely will work in some gator time.  My mother is a school teacher in Berwick/Morgan City (kind of like Shreveport/Bossier City), about an hour (or so) south of Lafayette.  Mom has been teaching school for many decades, and just can’t bring herself to retire.  I know you’ve seen the TV show “Swamp People”, but maybe you’ve seen another show based in that area (that started on the Travel Channel this year), called “Ghosts of Morgan City”.  I’ve been down there several times, but haven’t noticed any paranormal activity, except on the golf course, when the golf ball (mysteriously) gets diverted from where it was intended to go.  Otherwise, I know better than to swim with the gators in the swamp, because they enjoy dinner, just as much as I do (I like to eat).  There’s a photo of my wife sitting on a dead gator that was just brought into the dock in Morgan City, and more on Cajun Man’s Swamp Tours, along with other info on the new TomsMaHaul website “Future Trips” page HERE .

Connect With Us Listen To Us On