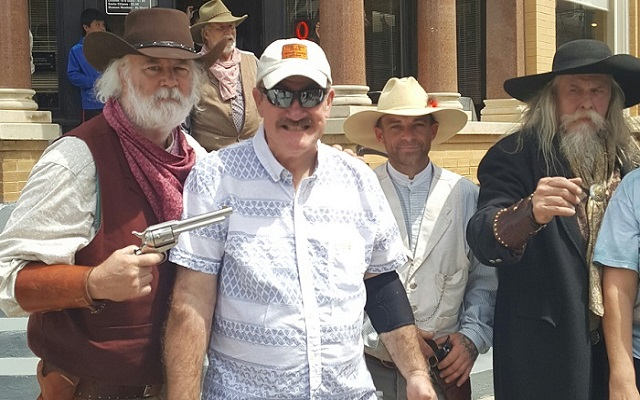 The Eagles “Desperado” album is a concept album inspired by the Doolin-Dalton Gang.  Some big songs have been heard many times on the radio, that came from the Eagles 2nd album (“Tequila Sunrise” & “Desperado”) but it’s the other songs on the album that I really dig.  While taking a Speech class at LSUS, after I graduated from Parkway High School, I had to come up with a speech to deliver to the class.  As usual, I’m a last-minute guy.  The night before the speech (which was also going to be on video) was due, I was looking through my vinyl record collection and was going to b.s. my way through a speech about album cover art.  I came across my Eagles “Desperado” album, and decided to do it on the Dalton Gang. Since that Speech class (late 70s), I have attended Dalton Days in Longview. There are several activities surrounding this annual event, but my favorite was the re-enactment of when the Dalton Gang robbed the Longview First National Bank in May 1894. This event is held by the Gregg County Historical Museum, which is worth the time take a tour. So……..

Where does the “foreign object” enter into this story?

You see that I’m being held up by the Dalton Gang.  What you don’t see is the “foreign object”.  Do you remember the old Shreveport Municipal Auditorium wrestling events, when the referee wasn’t looking, a wrestler would pull out a foreign object to harm his opponent?  Those were the days of Skandor Akbar, Cowboy Bill Watts, Dick Murdock, Buck Robley, Dusty Rhodes & many others, that were wrestling in the packed Municipal Auditorium. When I was in high school, some of my friends & I would do a little partying, and then go the wrestling matches. There is a foreign object in my left arm compression pad in that photo, that I would have used, had the Dalton Gang got out of hand.

How does Old School Sausage DONE RIGHT fit into this story?

You also see that I’m sporting one of my Down Home Meats caps in that photo with the Dalton Gang.  Down Home Meats is the Pride of Stonewall, Louisiana, and the (local favorite) Down Home Brand Sausage is “Old School Sausage Done RIGHT” & are always a part of your Blue Plate Special lunch hour rock and roll on 98Rocks.

And, there’s additional photos & more to the story when you visit my website that my son built for me… TomsMaHauL.com