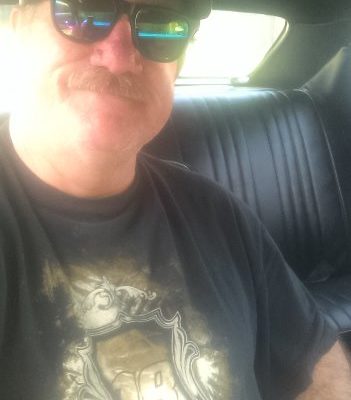 I’m hittin’ the road, ya’ll!  The best that I can recall, over 40 years in this business, this is the first time that I’ve ever taken a full two weeks away from work.  The Tom’sMaHaul motorhome is prepared, stocked, full tank of fuel, oil changed, chassis lubed etc etc.  And, I have the RV clean and shiny.  I did wash & shine, myself.  My son, Tim, did the oil change (including oil filter, air filter) & chassis lube, and I did the generator service.  All I need to do, is dust off the pollen, and, hit the road.  Plenty of Down Home sausages in the Tom’sMaHaul fridge, along with other vittles & cold bottles of water. We’ll head to Texas Motor Speedway for the NASCAR triple-header weekend, with NASCAR racing each day this weekend, along with the Stadium Super Trucks.  After Sunday’s big NASCAR Cup race, we’ll get up Monday morning, April Fools day, and head to Amarillo.  My wife and I plan to take our spray paint cans, and paint a big “40” on one of the buried Cadillacs at Cadillac Ranch.  It’s been 40 years since we got married at the Barksdale Air Force Base chapel.  I plan to paint “98Rocks” on one of the Cadillacs. It’s been around 35 years since we started 98Rocks.  Anyway.  After Amarillo, we’ll head to Albuquerque, New Mexico.  Before getting to our destination, I’ll pull into Winslow, Arizona and stand on the corner, when a girl (my Lord) in a flat bed Ford, will be slowin’ down to take a look at me.  Finally, we’ll end up on the other side of Flagstaff (Az), where a train will pass right by the Tom’sMaHaul motorhome.  We’ll ride the train to the south rim of the Grand Canyon.  I’ve never been to the Grand Canyon, so I’m looking forward to, finally, getting there. We’ll check out some of the other sites to see around the Historic Route 66, along the way.  What we don’t see going there, we’ll see on the return trip.  One stop on the return trip is in Southwest Oklahoma, where, 40 years ago, my wife and I took a bottle of Mateus Rose’ wine, along with some cheese, crackers, meats and other snacky stuff, and climbed over many huge boulders at Lake Altus, until we got to the top of the mountain.  The thing is, after an afternoon of the view from on top of that mountain, and seeing a beautiful sunset, it got dark.  Guess what?  No flashlight.  We had to climb down from that mountain at night.  It took another hour climbing down, than when we climbed up the mountain earlier in the day.  When we reached the bottom of the mountain in the dark, I turned on the headlights, & we pulled cactus thorns off of each other, because we couldn’t see the cacti in the dark on our way down.  But, when we stop on the return trip, we won’t be climbing that mountain again, though we’ll look up at it… and recall the memory of the climb that we did 40 years earlier.  I’ll be thinking about you while I’m road trippin’ through the Southwest.  When I can, I’ll post some photos of the journey at 98Rocks on facebook. I might even write some words in my blog section at 98Rocks.fm

While I’m gone for a few weeks, an old friend, and one of the original rock DJs in Shreveport, John Sherman, will be taking care of my studio duties.  John will be rockin’ ya’ at work, 10am – 3pm weekdays, until my return on April 16th.  Thanks John!  Keep ’em rockin’, brother!