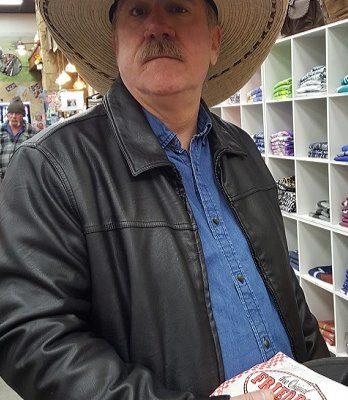 I dig truck stops!  I always see things on the shelves and racks, that I never see anywhere else.  Check out that hat in the photo.  Only 19 bucks!  I had to get it (at a Longview truck stop)!  Wearing that hat will add a little class to my frame.  Don’t you think so?  And, those fresh, fried pies in my hand.  I’m in a good place.  I’ll be stopping in at a lot of truck stops this Spring, because I’ll be taking the Tom’sMaHaul motorhome from Bossier City to the Grand Canyon.  Between now and then, I have places in the ArkLaTex to go to in the RV, and this weekend, I’ll stop at one of the Greenwood truck stops to fuel up the motorhome, and I’ll step inside and see if they still have the rack where they’re (hopefully) offering 3 beach shirts for $25.  I saw them on the rack in there, last month, and just had to buy 3 of them.  I’ve only worn one of them, since we’ve had, mostly, very cold weather.  After I wore that one, and washed and dried it, it shrunk up to my belly button (an innie).  So, next time I’ll buy XXXL, because I’ll be expecting it to shrink A LOT, after a wash.  But, for $25 for 3 shirts, it’s hard to pass it up.  While I’m over at Texas Motor Speedway (before heading west to the Grand Canyon), I’ll stop in at Buc’ees in Terrell, or the one across from the race track near Fort Worth.  Buc’ees aren’t truck stops, because the sign reads “No 18 Wheelers”.  I’m glad that motorhomes are accepted there, though.  I like that place.  It’s HUGE!  It’s hard to walk out of there without buying something.  I know it has a funny name, but Buc’ees Beaver Nuts are good.  I am looking forward to the triple-header NASCAR weekend at Texas Motor Speedway at the end of March.  But, then I’ll be looking forward to going to Amarillo (Cadillac Ranch), I-40 West through New Mexico, enter into Arizona and on to the Grand Canyon.  I’ll stop in Winslow, Arizona to get my photo taken, while standing on the corner with the flat bed Ford (like in the Eagles song “Take it Easy”).