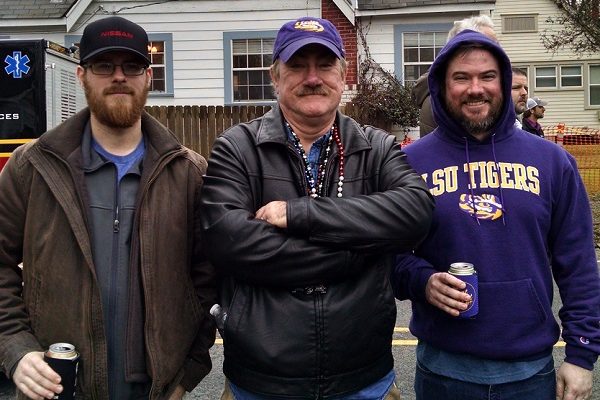 Mardi Gras 2019, all over the ArkLaTex, was great. The many Mardi Gras parades were enjoyed with decent weather, as the rain stopped long enough for each parade. Again this year, my sons enjoyed time with each other, at Justin’s (oldest son) place in Highland. Justin made excellent jambalaya, and I brought some tasty, South Louisiana, boudin balls. In the photo is Tim, Tom, Justin at the Krewe of Highland Mardi Gras parade. Below are a few photos of some floats that rolled by, tossing lots of beads, frisbees, squishy footballs, wrapped hot dogs, boxes of cracker jacks, packages of ramen noodles, some vhs tapes (very cool, because I still have a player) and so many other types of fun throws. A small NASCAR pillow (shapped like a race car) landed right behind me. A Shreveport Policeman tossed it at me. I was thankful, because I was standing in the back of the crowd, and wasn’t catching much of anything, at all. Being a big NASCAR fan, how crazy is it that item brushed my cap (as it flew by) and landed right behind me? That’s weeeEEERD! It’ll be on my dashboard, when the Tom’sMaHaul motorhome heads to the NASCAR Triple-Header weekend at Texas Motor Speedway, at the end of the month. Oh. I’m not sure if you are aware of it, but Crackers Jacks doesn’t have an actual free prize inside. It’s square, and looks like a free prize, but it’s actually a little sign that encourages you to go to the Cracker Jacks website. I was expecting one of those Cracker Jack lick-on tattoos, or some other rinky dink prize. I’m getting side-tracked here. Back to Mardi Gras. Here were a few floats that went by…. 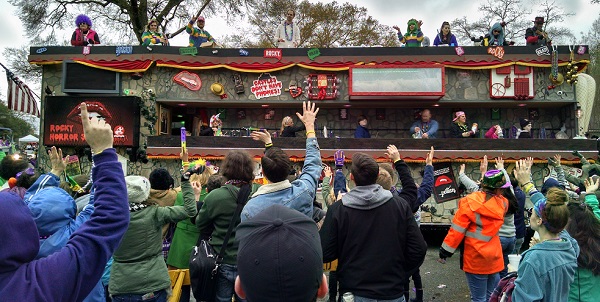 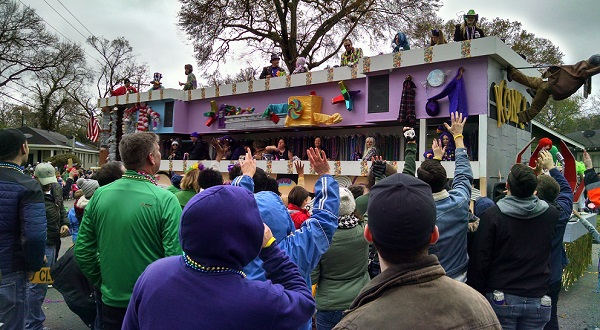