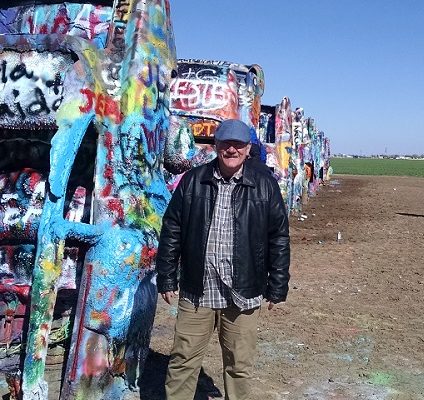 Half-buried things seem to be “a thing” around here.  The Tom’sMaHaul departed from Texas Motor Speedway, and ended up just west of Amarillo, Texas.  When pulling into my RV spot, the first thing that I saw was half buried motorhome. 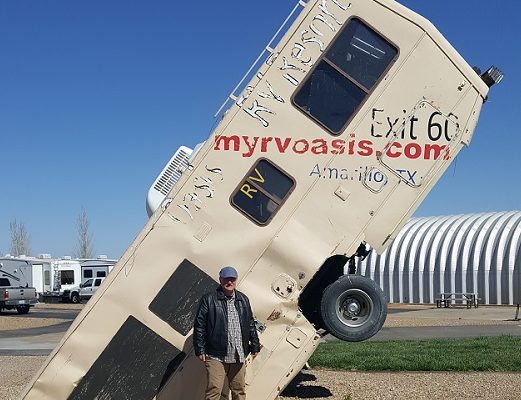 After setting up my RV, & unhooking the Jeep, we went to Cadillac Ranch.  This place is visible from I-40, along the interstate frontage road.  Just pull up your car, get out and walk through a farmed field, to see what is left of 10 buried, nose-first, Cadillacs.  When they were originally buried, the cars were either running, used or junk cars. Originally half-buried in 1974, the sculpture was done to recognize the end of the tail-fin cars.   The Cadillacs that were buried, range from the 1949 to 1963 model years.  People pose for selfies and other photos, but many have spray painted their thoughts on the cars over the years.  My wife and I spray painted “40” on one of the Cadillacs, honoring our 40 anniversary.  Supposedly, the Cadillacs are buried at the same angle as the Great Pyramid of Giza.  More info on Cadillac Ranch HERE

The eventual destination is the Grand Canyon, but on the return trip to Louisiana, we’ll stop again in Amarillo to go to Palo Duro Canyon.