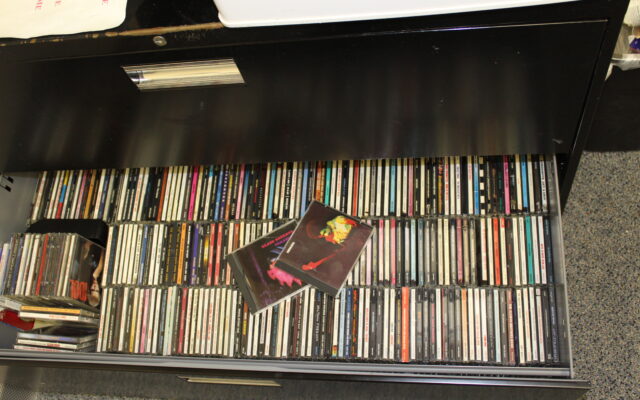 (Pictured above: A small sample of the massive 98Rocks Album Archive, stored in our secure climate-controlled facility, and maintained by Archive Curator Tom Michaels.)

Here’s something that might surprise you:  The compact disc turns 40 YEARS OLD this year.  They haven’t been around forever, like Tom Michaels, it just seems like it.  Do you still have a collection?  Or are they best used as coasters and Christmas Tree ornaments these days.  In any event, let’s celebrate with  a few facts about CDs . . .

1.  The very first CD was produced at a German factory in August of 1982.  It’s unclear what it was . . . so technically, it’s possible that it was an early recording from David Hasselhoff, but probably not.  The author bought his fist CD Player at Shreveport Refrigeration sometime in ’85.  If my memory is right (it isn’t), I think my first discs were by Genesis and Eric Clapton and Pink Floyd.  The player was a Technics fine-focus single beam (who could tell?) costing around 400 bucks.  Again, memory…

3.  It seems random to suddenly be selling “52nd Street” on a shiny disc . . . no matter how much you like “Zanzibar” . . . but that wasn’t actually the case.  There were 50 albums released on CD at once . . . “52nd Street” just gets the special distinction because it had the first catalog number.