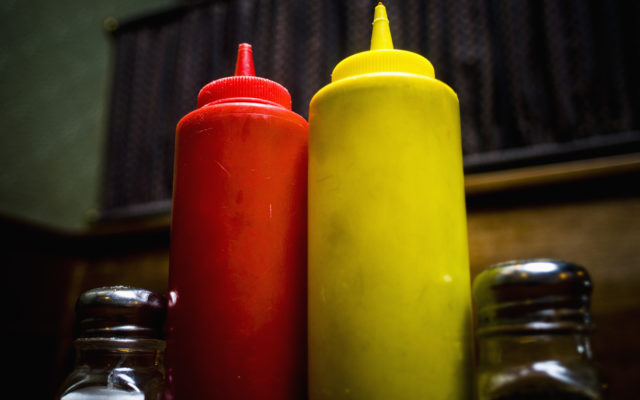 Red and yellow squeeze bottles containing ketchup and mustard, alongside salt and pepper shakers. Taken from a low angle.

“Meatloaf Monday” at our house, my second favorite food-day of the week next to “Taco Tuesday!”  If you think about it, it’s perfect too, since there’s nothing that ol’ back to work monster Monday  can throw at you that can’t be cured by a fat slab of Mom’s finest loafage, plated alongside steamy mashed-potatoes and brown gravy, fresh-from-the oven buttermilk biscuits and well, take your pick: lima beans, purple-hull peas, butter beans, heck just about any member of the legume family right?  Except peanuts and such.  Spinach?  Greens?  Bring it on!  Could I maybe fit a spoon or two of mac-n-cheese down me as well?  I dunno, here…twist my arm!   Merriam-Webster defines the entree as: “a dish of ground meat seasoned and baked in the form of a loaf.”  Pretty simplistic.  There is an art form to the truly great ones.  My wife creates one of the finest.  So good in fact, that I rarely order the dish when I eat out.  I’ll only be disappointed.  No offense to all the eateries who offer their version, and I’ve probably tried most all of them from Strawn’s to Georges to a Waffle House in Micanopy, Florida and beyond.  Hey, like”a bad day of golf is still better…”, meatloaf doesn’t have to be perfect to be good.  Real good in fact.  That it is basic and cheap and easy is what it’s all about.  But in much the same way Top Ramen can be spiced-up by the adventurous, so too can a meatloaf become a culinary masterpiece.  I’m not privy to every ingredient my Sweet adds to the mix, and even if  was I couldn’t divulge that info here.  But however she does that meatloaf voodoo that she do, well it just shames other foods calling themselves meatloaf.   A lifeless mound of hamburger with a ketchup “glaze?”  Yeech.   A mushy heap of mystery meat the color of a mauve Crayola?  Not since the school cafeteria.  The taste, the texture, the aroma.  They have to be built right, assembled perfectly from the ground-beef up, so to speak.  The proper crispiness on the outside, juiciness within.  Like a Shepherd’s Pie, you know that breaking through the crust-to-meat barrier is the best part, and should reveal a flowing river of beefy juiciness akin to no other earthly delight.

You’ll notice my featured photo is not meaty at all, but not because I didn’t search the archives thoroughly.  The few stock “meatloaf” pics I had access to did not really resemble that particular food in any way.  Not even in a Chef Boyardee way.  I found a few of singer Meat Loaf, and I bet I could have gotten away with one of those, based on the premise that he’s probably put away more than a few loafs in his time.   Since I don’t have a pic of my wife’s latest meatloaf handy, (I know, what’s wrong with me?  Doesn’t everybody pictorially chronicle every single food item that enters their pie-hole these days?) I opted for the nice condiments with salt-n-pepper shot.   At the Denny’s in Tuscaloosa and many places between here and there, you’ll probably need them.  At my place, just bring your appetite.  And some beer.  Later.