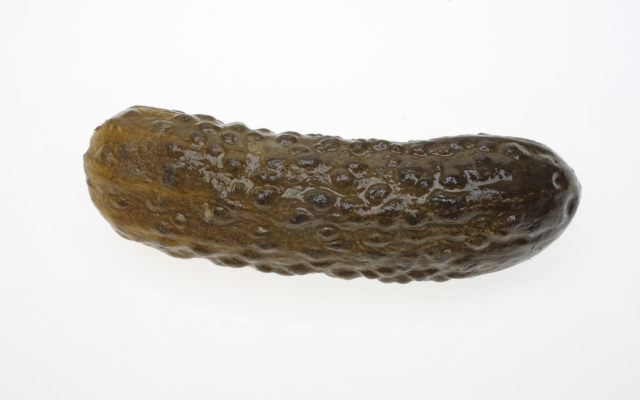 I believe it is the image of the diminutive gherkin pickle I selected for this post, which probably wasn’t the variety tossed from a Vermont motorist’s car, which resulted in causing some pain when it struck an unsuspecting highway worker.  At pinkie-length, I doubt a gherkin would have led to an assault charge. Neither would have a discarded slice from a burger. Had to be a good sized, whole pickle, right?  Slices and spears wouldn’t  do it.  Even if you could get the right trajectory, spears are likely to bend on impact, rather than inflict any discomfort.  Now those big fat single honkers wrapped in plastic in their own pickly-juices would probably leave a welt on you.  I just wonder why you’d go through the trouble of making that particular convenience-store counter buy, just to chunk it at a highway worker?  Maybe the pickle wasn’t your first snack choice.  Maybe you really wanted one of those pickled eggs in that jar of pink liquid, but the guy in front of you got the last one.  To go with his Slim Jims and Swisher Sweets.(The wacky-watermelon flavor, many people are saying they make the best blunt) Whatever the reason, the driver will have to tell it to the Judge, and the construction worker will have to convincingly say he’s never been pelted by anything worse while working on the road.  I kinda doubt that’s the case.  That rubbery egg might leave a wicked mark.