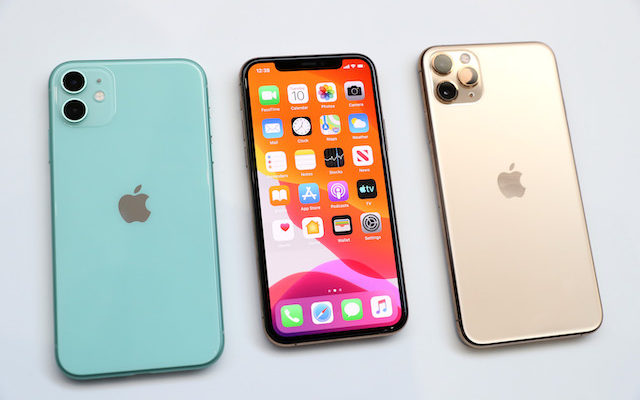 CUPERTINO, CALIFORNIA - SEPTEMBER 10: The new Apple iPhone 11 (L) and iPhone 11 Pro (R) are displayed during a special event on September 10, 2019 in the Steve Jobs Theater on Apple's Cupertino, California campus. Apple unveiled several new products including an iPhone 11, iPhone 11 Pro, Apple Watch Series 5 and seventh-generation iPad. (Photo by Justin Sullivan/Getty Images)
Sure, it’s got a better camera, a faster processor and a clearer screen. But probably the most attractive feature of the new iPhone is its price.

Unveiled Tuesday, Apple’s iPhone 11 starts at $699 — which is $50 less than the phone it’s replacing. The new model has a faster, more energy-efficient A13 bionic chip and a bunch of camera improvements, like “Pet Portrait Mode.”

Apple also debuted the two higher-end models, the iPhone 11 Pro and the 11 Pro Max. Among the differences between the Pro versions and the standard 11 is the screen; the 11 has an LCD, while the other two have an OLED, which provides sharper contrast and higher resolution. The Pros also have three camera lenses, whereas the 11 has two. The Pro starts at $999 and the Pro Max starts at $1099.
Customers can pre-order the new iPhone starting at 5 a.m. PST on Friday. They ship September 20th.

While much of the buzz surrounding Apple’s live unveiling is focused on the iPhone 11 series, the company’s flagship product isn’t the only upgraded offering announced on Tuesday.

Also announced was the Series 5 Apple Watch. It sports an “always-on” display so users no longer have to raise their arms to wake up the screen. In spite of what would appear to be a big power draw, the device reportedly delivers 18 hours of battery life. It will sell for between $850 and $1,300. If that’s too expensive for you, the good news is the new model has knocked down prices for older versions. The Series 3 Apple Watch can now be purchased for only $199. Pre-orders for all products begin at 5 a.m. PST Friday.

Do the features and performance of Apple products make them worth the money? Or is owning one just a status thing?

Add an Event to the Gig Guide

The Home of Rock & Roll
SOCIAL