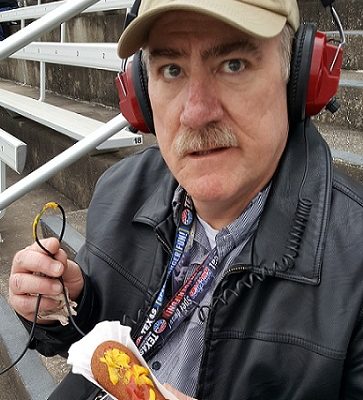 The story behind this photo – They were shooting corndogs up into the crowd before Friday night’s Texas Motor Speedway NASCAR Truck race, and I caught one. I got a little mustard on my scanner headphone cord in the process, but I caught that dadgum corndog! That’s the Hollywood story. It would make for a great scene in a movie. But, the truth is, I sat down in my seat, after getting a corndog at the concession stand, and was settling in for the start of the race, when my wife noticed that I had mustard on my headphone cord. It appears that, when she took the photo, I was kind of baffled by what just occurred. An old pro like me, making a rookie mistake like that? Hard to imagine, huh?