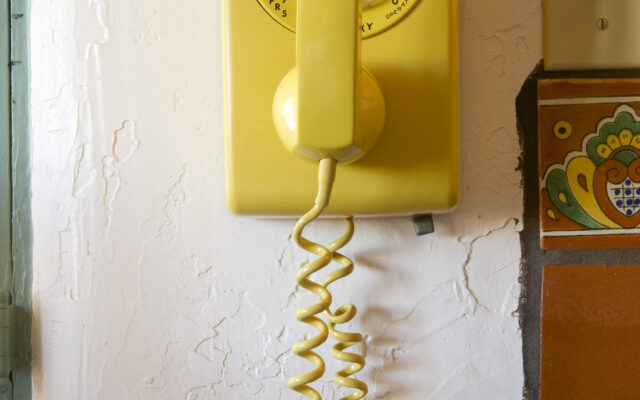 Kids today have no idea what a rotary phone is, or how to use one.  Here’s an over-the-top way to fix that:  A website called Sky’s Edge is selling a new ROTARY CELL PHONE.  But you can’t just buy one . . . you have to build it yourself.

For all you young-uns, rotary phones are those weird boxy things with a wheel on the front.  Everyone had one until push-button phones took over in the ’80s and ’90s.  In some families, there was one central phone for the whole household!  Egads how’d we do it?  My private calls with my girlfriend happened on a kitchen phone like the one pictured.  We had a ridiculously long cord on the handset, (probably so Mom could go about her kitchen activities and chain-smoking cigs without being tied to one spot) but it allowed me to slip out the backdoor and at least have a little privacy.  Until Dad got an extension anyway, then I had to listen for the sound of my little brother picking up while at the height of my romantic emoting…”So uh, well, ummmm.  Yeah.  School sucks.  So like, you wanna go see Rocky with me?”  Mr Suave I was…

Anyway, back to the phone kit.  The kit comes with everything you need to build this rotary abomination.  And it’s meant to be easy, so there’s no soldering or gluing required.  It comes in five colors:  White, black, beige, red, and seafoam green.  And it’s got a brass bell built in, so it even sounds like a rotary phone.  It also has more modern features, like a headphone jack . . . a USB-C charging port . . . a screen on the back to display texts . . . and a SIM card slot, so it works with most phone plans.  But you can’t browse the web or check social media.  And alas, no camera.

A woman named Justine Haupt came up with it.  She’s a space engineer at Brookhaven National Laboratory in New York.  And the idea briefly went viral two years ago as a way to have a phone without all the “digital distractions” that come with it. She decided to sell them as DIY kits, because she thinks it’s awful that no one understands how technology works anymore.  We just want it to be intuitive.

You can pre-order at SkysEdge.com, and it’ll ship by November in time for Christmas.  They’re not super-cheap though . . . each kit costs $390.