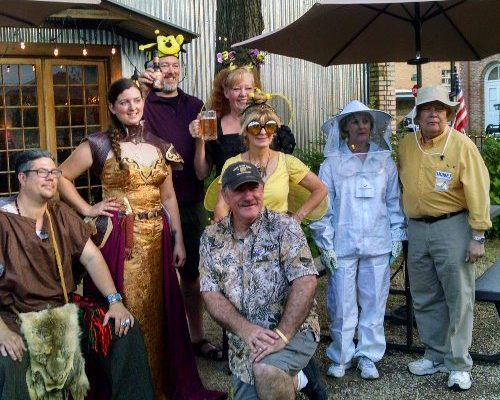 Recently, I met up with Frank, Cathy, Teri & others for the Honey Bee Mead Festival at KnightLight Tavern in Jefferson, Texas.  Honey bee mead beer/wine is known as the oldest libation.  I think that it was Richard Penner at KnightLight, who told me that?  I believe it was Richard who said that the Vikings drank mead beer.  But, then Frank told me that the ancient Egyptian pharaohs drank honey bee mead booze.  Karen (Richard’s much better half) introduced me to some people bringing attention to reducing the amount of pesticides that are killing the honey bees and other pollinators.  The crowd enjoyed the Honey Bee Mead Festival, and sampling the different “bee booze” (as I called it).  Karen is the one behind me in the photo, with the big bee glasses, bee wings on her head and yellow outfit.  She’s always a very nice lady.  I was a designated driver, so I didn’t partake in the oldest libation known to mankind. I noticed that Cathy (Franks’ much better half) was a designated driver, too.  I can always pick out the designated drivers in a crowd.  Others seemed to enjoy the beer/wine sampling, though.  I enjoyed hangin’ out and seeing everyone else have a great time.  Plus, I learned a few things about honey bees.

Prior to attending the Honey Bee Mead Festival, I joined the big crowd at an artisan festival & crawfish boil at Made In The Shade in Jefferson. I enjoyed some spicy boiled crawfish, with perfect weather to check out the many booths in the courtyard of Made In The Shade.

The TomStory (and I’m stickin’ to it) HERE