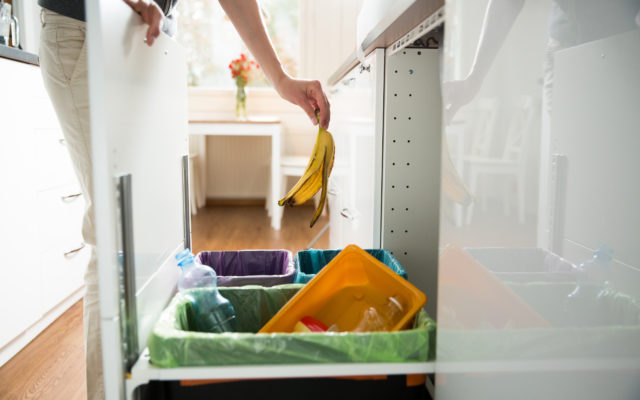 Garbage Day!  The weekly joy of “Out with the old, rancid and way too ripe garbage, in with a banged-up smelly can left on it’s side three doors down!”  In my neighborhood it is Friday morning.  Some roll out the cans on Thursday evening, then there are the pre-sunrisers like myself, (at five am you can hear those plastic wheels rolling down a driveway from six blocks away I bet) and finally the “Oh my god here comes the trash-truck, hurry and grab that bag!!” types.   I like to think that if a sprint to the curb donned in bathrobe and bunny-slippers can be done with any aplomb, I’d be up to the task, but when  something starts seriously leaking out the hefty bag, all bets are off.  Lately in my ‘hood, it’s not a sure bet Friday will even be garbage day.  Ever since 1996, unless the scheduled was altered due to a holiday, you could count on that truck coming down the block by nine-am at the latest.  When the recycling program began, it was the same situation, with the recycling collection right on the heels of the softer waste guys.  Then not long ago, those early morning collections came later and later.  About the same time recycling collection was reduced to every-other week.  Not everybody on my block remembers if this is the one-can or two-can week, (understandable, them being under the pressure of the big day) which results  in somebody always having a can of either recyclables or garbage at the curbside.  Whoops.  Wasn’t recycling this week after all?  Well, no harm leaving the can sitting there until next Friday, right?

For the past several weeks however, it hasn’t mattered much who remembers what to put out and when in my neighborhood.  We’ve had some “Trash-Days” that never materialized.  The whole block, ignored.  No pick-up by 3pm.  Nobody coming around Saturday.  Well, I guess we’ll just roll the cans back and hope for the best next week.  Hope it’s cold and you don’t have forty-pounds of crawfish shells in your garbage.  Or leave ’em by the roadside, who knows, they may be by on Monday or Tuesday.  They’ll get it eventually, and anyways, it’s not like it’s costing me oh, what, $216 a year, right?  Not yet anyway.